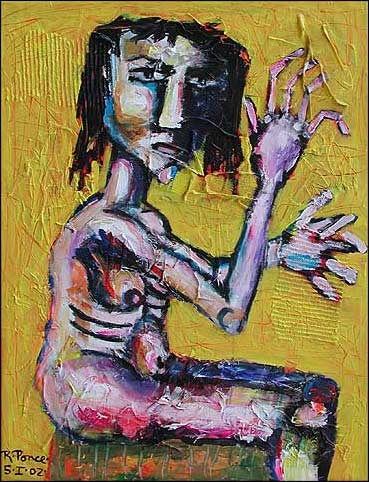 Roma Graves, lone wolf crank,
Quakes with overset gestures,
A tragedian out of her vintage.

Warning light inherits her stretch.
Camera 2 tracks back-slipping
Through a window. The soundbox lay-out
Amplifies to a mouth-foaming zoo –
I accessorize fidelity
To a blue-pencilled script.

Shots alight on a screen –
False-front unity swizzled in Editing.
Whose gaze is being projected?
You’re hurtled
Run-back in time, tiding over
With symptomatic long-suffering
For blood-spilled credits.

A whimsical segment of factors
Can on-trust be paraphrased
Into a light-trick…steam
In the pipe organ,
Play-against performance styles;
Camera 2’s pitches are moored.

Foreground. Midway, backdrop.
Bette Davis is more than a match
For a Rothman.
She crams a grip-sack –
A Bedlam lip-curl,
Unwieldy sustained
Through lunch.

In the Theatre Profane
Inescapable revelations arise,
Head-on to Camera 7…

Christopher Barnes is a gay poet from Newcastle. In 1998 he won the Northern Arts Writers Award. His collection, LOVEBITES was published in 2005 by Chanticleer Press.