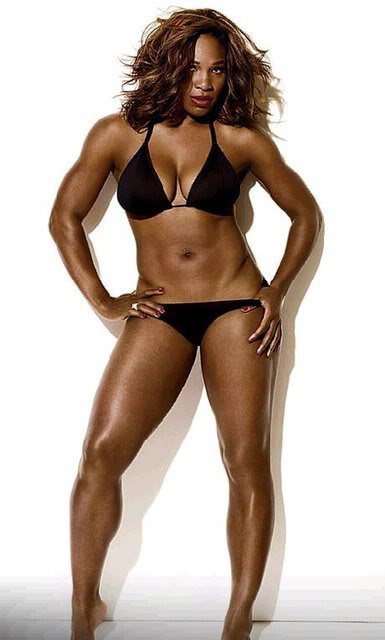 As Serena Williams stands in the winners circle, the world stands reminded of how powerful our women athletes are.

Serena Williams is the first – let me repeat – the first woman or man in Olympics history to win Golden Grand Slam both in singles and doubles as of 4th August 2012 – a victory she shares with her super star sister, Venus Williams.

And though we at Femficatio are first to have our criticisms of the Olympics (see  guest contributor’s article by M Thandabantu Iverson) we can’t help but be in awe at the shear power of Serena’s competitive passion and incredible discipline.

But none of this came easy. Growing up in Compton, California, one of the 11 most dangerous cities in the United States, and then moving to Long Beach to hone her tennis skills at age 9, Serena had an uphill battle when it came to racial polarization in the United States.  Pulled out of the tennis academy in 9th grade because her father and mother overheard derogatory terms being said about her and Venus, they continued to be coached by both their parents – and outside of Junior Competitions.  Even as an adult in 2001, Serena fell victim to racial slurs from fans when Venus pulled out of the Indian Falls match due to injury four minutes prior. Since then, neither she nor Venus has ever competed in an Indian Falls match.

The youngest of five sisters, Serena lost her older sister and agent, Yetunde Price to gang violence in 2003.  Serena then had to sit out the 2004 Olympics due to injury (and some speculated grief). And though she has millions of devoted fans worldwide, she gets her share of bad press due to her enthusiasm to win, vanity and honesty with the press regarding feelings about the game and herself.

Race and gender have consistently dominated how the media has portrayed Serena and her older tennis champion sister Venus.  Throughout her career there were always those who said she was too muscular, too dark and had way too much attitude for tennis.  She’s even been accused of looking like a man.  As well as distracting her opponents with her hair and “scream” during her serve and being argumentative –  court actions not befitting a woman, especially a Black woman given the opportunity to play at such a pinnacle in a White sport.  At the beginning of the 2012 tennis season (for which she already had an 86% win rate) she was criticised by Yahoo! sports pundit Chris Chase for the statement “I don’t love tennis today, but I’m here” after beating Chanelle Scheepers at the Brisbane International. Chase then went on to criticise Serena for not liking the gym or exercise (though we could bounce a torpedo off her bottom so she must like some kind of exercise.)  He also criticised her for her “candor”, citing it as “selfish nonsense” because she’s failed to “apologise” for “threatening” a lineswoman at the 2009 US Open.   Imagine the #2 women’s tennis champ losing a match and losing her temper to the tune of “If I could, I would take this … ball and shove it down your … throat” absolutely unbelievable isn’t it?  Well maybe if  the movie The Help was already out, Serena would have realized if she’d just waited to go home and fry some chicken she would feel much better about life.  In many ways, Serena William’s tumultuous career reminds us of all the rigmarole and negative  media critiques of Muhammad Ali’s boastful ways.  And by the way, Serena publicly apologised for losing her head.

“I became unplugged,” she [Serena] says. “What I did was totally uncalled for and unnecessary and you know, bratty and whatever. I apologized. But I told her I need an apology, too, because I didn’t foot fault.”

Regardless of the controversy, with every win Serena catapults the visibility of Black beauty and sensuality to centre stage, and this win in particular sets a standard for women in sports everywhere.  Women can be just as ruthless, competitive and arrogant about their abilities as any man – and that’s sports folks, for all athletes, irrespective of gender.

In a world where most of the current pop icons are contrived, to witness the energy and uniqueness of personality that Serena embodies on the court is refreshing.  Many of the superstars we see are creations from some corporate entertainment machine, cautious to be portrayed in a certain light and quick to defend the status quo. Songs like “Put a Ring on It” and “Cater To Your Man” come to mind.  Yet, when Venus and Serena first graced tennis courts as young teenagers in beads, they didn’t take them off (even after Venus was fined after they popped out on the court) – they didn’t stop being girls from Cali.  They weren’t in pageants trying to be the image of perfection for older men in  sexist competitions pitted against other women’s beauty.  They were training to be the best, their own personal best.  When everyone was wearing tennis whites, it was Venus and Serena who changed the game with lime greens, bright pinks and black skin tight outfits – big earrings to boot!  And they didn’t let anyone tell them who they were supposed to be. They were and remain themselves first.

As feminists, we’ve had our problems with Serena.  She is often  too appearance conscious, as she explained to Oprah, “I’m a firm believer, if you don’t look good, you won’t play well” which could make young women who don’t possess Serena’s natural beauty feel like outsiders.  So we don’t think about role-modelling here in the follow blindly definition.

We know that for all little girls playing tennis, and those who choose excellence as their path, her extraordinary career gives them something to aspire to. All physically fit women can look at Serena’s styles and feel that muscularity is sexy – an adult body is the body to have.

And we know too as women, though firsts are what they are, not an end all and be all of accomplishments – it still feels damn good to beat a man in athleticism and bring home a gold before the boys do.  I know it’s petty… but it does feel really good.

Venus and Serena play doubles at the Olympics this weekend.