What most of us already know is that essential to the overall functioning of any society is the optimum health and well-being of its women.  Taking this for granted, feminist ideology forwards political solutions to women’s historic and systematic oppression, assuming first and foremost equality under the law as a basis for transforming women’s unequal status. That’s the easy stuff; the struggle to assess cultural signifiers undermining women’s wholeness has an array of determinates.  Thus we find in current circles outlining and defining woman’s experience, the “womanizer” trope being posited as one of those cultural signifiers.  And while it can logically be construed as a woman’s issue, we need to ask if it’s really an issue for serious feminist consideration?

Surprisingly, I’ve heard many women who consider themselves feminists embrace and banter about the idea of the womanizer; a more contemporary take on the Romeo, Lothario, Casanova and the urban playa – you get my drift – the guy who just can’t seem to keep it in his pants.

It is troublesome, this feminism that does not inquire into the actual philosophies that undergird and sustain patriarchy. Far from a contemporary neologism, the term “womanizer” has been around for ages, making a serious comeback with a Britney Spears album.

Let’s be clear.  I am not an apologist for cruel, insensitive and smarmy male behavior, but the fact that this term accompanied by the misdeeds of men who fit the moniker has been elevated to a major concern for women and even those who identify as feminists is quite vexing.  Take for example the indictment and recently declared mistrial of North Carolina Senator and once American Presidential hopeful John Edwards, who allegedly participated in campaign finance fraud to hide his extramarital affair and pregnant mistress who was also his campaign aide, Rielle Hunter. This domestic drama made media spectacle was yet another opportunity for extremely public expressions of moral outrage at the intimate failings of individuals, while issues of sabotage to the interests of planet and person remained in the grid of societal inevitabilities, i.e. taxes, death, poverty, war, etc.  In the wake of escalating racial and sexual assaults, joblessness, global conflict, frequent environmental hazards and other critical life concerns; should any of us have been giving this episode our precious attention?

In the words of wise man Noam Chomsky…”When the press focuses on the sex lives of politicians reach for your pocket and see whose pulling out your wallet.”

I am in no way patently insisting that lack of ethical behaviour in one’s private life has no bearing on one’s public one.  Yet this normative of unequivocally raising questions of a man’s marital fidelity to establish his fitness to serve – in atmospheres that would rival Ringling Brothers has grave implications, inasmuch as it can and I believe is being used to fuel neo-conservative agendas.

And also, financial ones.

The New York post recently reported that the controversy surrounding the so-called “sperm-hustler” Antonio Cromartie, father of 10 with “six baby’s mama’s” will be made into a reality TV show. His ex-fiance Rhonda Patterson has already written the grisly details in “Love, Intercepted”.  Proving that the womanizer trope is profitable.

Sexually promiscuous football players notwithstanding, even Dr Martin Luther King Jr., has become a frightening casualty of this manipulative social construction.  But we’ll discuss this more later.  In the case of Senator Edwards, in BR times (Before Rielle) – he was positioned as the most logical choice for working people, and even actor and activist Danny Glover chose him as his candidate over the possibility of a first Black president or woman, citing his forthrightness on issues of poverty.

Elizabeth Edwards had cancer which ended her physical life.  She was an attractive, intelligent woman who was dedicated to her husband’s political advancement.  She was also a loving mother who had known the painful abomination of losing a child.  It is not at all surprising that folks of both genders would feel impassioned by the idea of a cheating husband and a devoted terminally ill wife.  Yet privacy is still privacy.  I see no need for exception in this case.  The mistress in question has since published a tell-all memoir about the affair, allowing a frenzied media to be fed more tabloid forays into the intimate and steamy interiors of private lives – overheard  in the mêlée of this true-to-life soap opera; seething Niagara’s of conversations conjuring the dutiful wife versus the shameless vixen, the pristine Madonna versus the wanton whore.  Even worse, after some of the women on the American television show The View tore into Ms Hunter on the show, you’ll recall how host Sherri Shepherd (who makes no secret of her traditional Christian values) suggested she learned something from Rielle about how to keep her new hubby from straying that perhaps all women could learn from?  Scary, but this is the level of conversation that giving validity to the womanizer trope engenders. 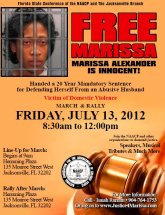 I for one am waiting for The View’s discussion of the Marissa Alexander case; how about the girls’ tearing into a female prosecutor who would send a message to a woman-beater that he was the one wronged when his wife fired a bullet in the air mind you, to keep him from attacking or maybe killing her. Something like, ‘you know Ms Prosecutor, your career was won on the backs of feminist struggle, your livelihood assured by the sweat of women like Marissa – how exactly do you reconcile these contradictions?’

Elizabeth Edwards was less than discreet about her disenchantment with her husband’s mistress. Some mainstream feminists have criticised her for that.  I’m thinking that as feminists we should steer clear of debates that dissect non-issues masquerading as woman’s interest and empowerment, for to even attack the Edwards/Rielle situation from a woman’s solidarity standpoint, that is – “why do we as women always blame the other woman for what the man does?” is giving substance to a problem that is contrived in its exposition, a way for women to rally around antiquated matrimonial man-dates tendered by the patriarchy.  These kinds of discussions rip at women’s deepest fears and insecurities of being cheated on, not “having it all”, being single with child or childless, being single in a world without the privilege of couple-status or having their men spirited away by Jezebels. The neo-cons know these fears all too well and eagerly capitalise upon them.  Feminism has always challenged the legitimacy of traditional marital paradigms as source and enablers of women’s oppression; these are the discourses that feminists need to continue to engage in, rejecting personality cult debates in favour of the revolutionary idea.

I like the idea of marriage, though I readily admit it’s not for every woman and is definitely a woman’s choice.  For many married women, religious belief systems which are patriarchal in their essence play some role in their unions… Christianity, Islam, Judaism – also their choice.  I can no more interfere in Elizabeth Edwards decision to “stand by her man” when she did, than I can with a Muslim woman’s choice to wear the hijab.

My litmus test for intersection of the personal and the political tends to centre on violence, force and inability to consent – and yes I am aware that there are subtleties and gradations in each.

Globally, governments are lowering ages of consent, more and more girls and women are being sex trafficked, more and more mothers are losing their children to racial violence, are being ripped from their children – incarcerated for life.  Women’s reproductive rights are in jeopardy and middle-aged women have a staggering unemployment rate with homelessness being the outcome.

It is not simply that we have bigger “fish to fry” than worrying about the Don Juan factor, it is that around the world we are facing the kind of survival issues that call for a retrieval of feminist ideology grounded in a people centred justice – the 19th century club women comes to mind.

What I guess I find most disturbing is that by haplessly buying into the womanizer trope, we readily align ourselves with the enemies of the very justice we as women say we are seeking. I don’t have to believe that Martin Luther King was angelic to know that we should teach our children about what an extraordinary human he was.  He had failings and didn’t live long enough for us to make our feminist case.  He was a chauvinist.  But no matter how they distort history we know that truly depraved people do not transform the consciousness of the world for such good. We know that even though he was unfaithful, relationships are complex – he was faithful to the protest, advocacy and commitment that tore down the walls of segregation – that could stand with sanitation workers when they went on strike – that would courageously speak out against the Vietnam War for which he paid with his very life.  No, he was not so busy being a philanderer or a sexist that he didn’t stop to give his life to change the landscape to a fairer and more hopeful one for us all – including women.

Sadly we live in times when the gravest issue when it comes to womanizing affects our physical health.  The HIV/Aids rate among Black women in particular is devastating. Increased awareness of issues focusing safer sex, reproductive healthcare, global problems of forced marriage, rape, family incest, molestation and underage girls in western societies with poor refusal skills are all feminist concerns.  It is in this atmosphere of raising consciousness and empowering ethical feminist leadership to address these concerns that our most intimate relationships will inhabit the ways of truthfulness, fairness and reciprocity.