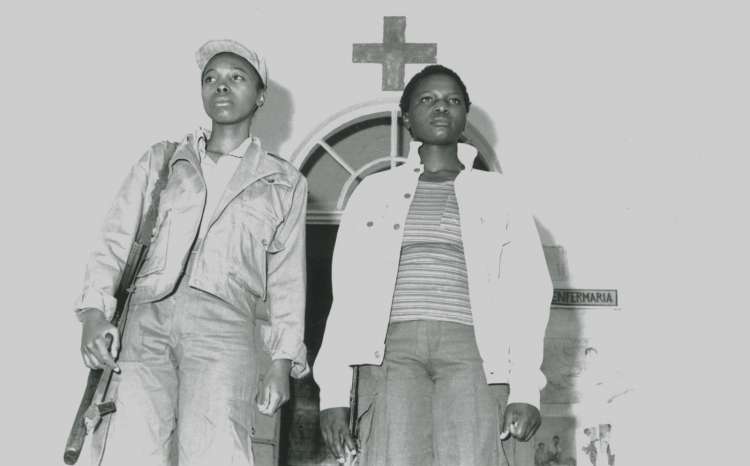 Written and Directed by Ingrid Sinclair, 1996

Zimbabwe was often central  in world-wide media reports because of the antics of  it’s president, Robert Mugabe – the economic corruption and brutal dictatorship of his people being zealously public. But the revolution that saw the oppressive white majority lose its ability to exploit, and the freedom fighters who participated in this struggle in the 60s and 70s are not talked about enough. Particularly the women.

Flame is considered one of the most controversial films ever made in Africa. Seized by police on the grounds that it was pornographic; Flame tells the story of female freedom fighters who fought on the front lines with their men against British imperialism. With a deft flair for dramatic realism, Ingrid Sinclair’s film demonstrates the power, dedication, organisational abilities and discipline of female warriors. She was also  unflinchingly candid about the sexism in that struggle – the use of female soldiers as “comfort women” and the abuse, disrespect and disregard they went home to after the revolution. Though some female veterans say that wasn’t the case, and male veterans flat out deny it as western propaganda –  it is a well documented fact that women freedom fighters weren’t treated equally, as in most liberation struggles around the world.

Two close friends, Florence, who was  brave and adventuresome and Nyasha – academic and cautious, both join the liberation struggle in 1975. They run away to the rebel camps as very young women and take on  guerrilla identities, Nyasha dubbed Liberty, and Florence becoming Flame. They endure the extreme hardship of guerrilla life, and prove themselves to be outstanding soldiers. But post the revolution, back at home, Flame’s husband fellow comrade Danger, becomes physically and emotionally abusive.

Years later when Flame and Liberty reunite at a Hero’s Day Party with fellow soldiers male and female, they turn on the television and see that the procession of leadership is singularly male.

Angela Davis said of the film:

“Flame is a bold, powerful, and deeply moving portrayal of the courage and complexity of Zimbabwean women freedom fighters. It depicts the real-life relationships among those engaged in national liberation struggles and of the challenge of sustaining those relationships in times of peace. This is a very impressive work.”

You can buy Flame from California Newsreel by clicking here.

Email submissions@femficatio.com if you have anymore you think we should add!

Revisit all the Top Feminist Films by clicking here!